The War-Time History of my Great-Grandfather, Robert Mijamin Patterson, M.D. 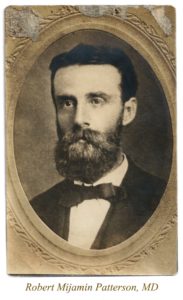 What follows is a condensed history of my Great-Grandfather, Robert Mijamin Patterson, who served the Confederacy as an Assistant Surgeon throughout the Civil War. (Click image to enlarge.)

Robert Mijamin Patterson was born on July 14, 1837 in York County, South Carolina to parents William and Margaret Patterson. In 1850, the Patterson family lived in Union County, North Carolina. Robert Mijamin Patterson got his medical degree from the Medical University of South Carolina in Charleston. He did his thesis on Pneumonia and graduated in 1856. (The Historical library department at MUSC has record of him from 1856. I’ll be able to go there and read his dissertation. It has not been digitized yet, but I hope someday it will be.)

According to the 1860 Lancaster County, South Carolina Census, on July 26th of that year, Robert Patterson was a physician living in the home of Titus Laney. In 1861, “R. Mijamine Patterson” enlisted as a Sergeant in Company H of the 1st Regiment of South Carolina Volunteers. On Captain Robert Meriwether’s Company H Muster Roll form, which was dated July 1, 1861, R. M. Patterson was recorded as having “joined for duty and enrolled on January 7, 1861 at S[ullivan’s] Island” near Charleston, South Carolina for a term of 6 months. At that time, he was almost twenty-four years old. His military records state that on July 9, 1861 he was mustered out of the 1st SC Infantry. (Click on images below to view Muster Roll forms.) On August 28, 1861, “R. M. Patterson” joined Company I of the S.C. 12th Infantry at Lancaster County Courthouse in Lightwood Springs, South Carolina. The 12th Infantry served on the South Carolina coast near Pocotaligo until April 1862, then the regiment moved toward Virginia. Although his records state that the exact date was unknown, at some point in 1862 Dr. Robert M. Patterson was discharged from the 12th South Carolina and became a Surgeon in the Field & Staff CS Medical Staff. His records indicate that he was an “A. A. Surg,” or “Acting Assistant Surgeon,” from then on. He was also described as a “hospital ward master.” On July 4, 1862, R. M. Patterson appears on a “Register of Medical Director’s Office, Richmond, Va.” At that time, he was assigned to General Hospital No. 19 as the “Acting Assistant Surgeon” [AAS].

Following the war, Dr. Robert M. Patterson married Minora Susan Polk and eventually settled in the Wake County/Durham area. Dr. Patterson established a private practice and continued to serve his community as a physician. He later lived in Greensboro and is buried there in Green Hill Cemetery. He died in 1905. His widow’s application for pension is below.